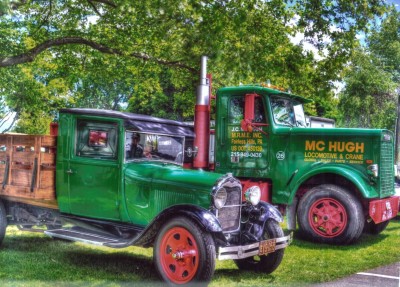 The McHugh’s infamous equipment color scheme of green and red, is a 125 year old tradition.

Several of the American Hoist & Derrick Co. cranes built between 1962 and the mid 1970’s, were developed because of the innovative concepts of Jimmy McHugh. 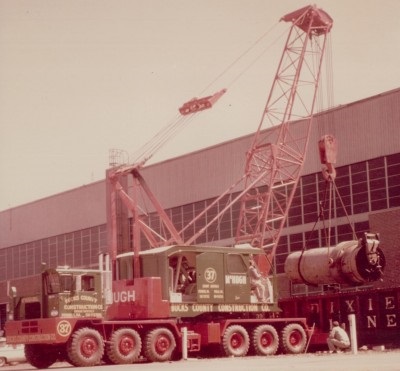 The McHugh family business diversified and expanded under the direction of Jimmy McHugh. In 1962, Jimmy was instrumental in the design and development of the worlds first 6 axle truck truck crane carrier that had 3 steering axles and 3 drive axles. Jimmy McHugh decided that his new 6 axle crane carrier would be of a fabricated welded construction built with the newly developed USS T-1 steel, another one of the McHugh’s and worlds first. Jimmy McHugh was able to convince Bill Hendrickson of his idea and the crane carrier was manufactured by Hendrickson Truck of Lyons IL. Jimmy McHugh was also able to convince John Carrol the president at the American Hoist & Derrick Company, to supply a new 700 series American crane upper for Jimmy’s new crane carrier. This made Jimmy McHugh’s machine the world’s first 6 axle truck crane with a 100 ton lift capacity. 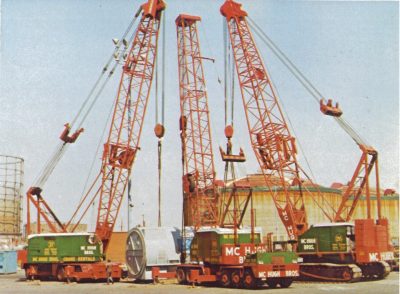 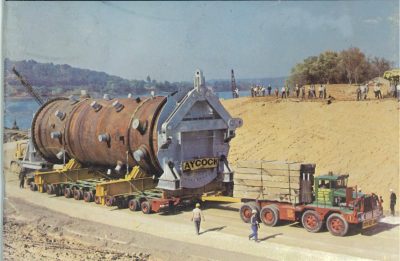 A 3 axle Cline 100 ton off-road dump truck that was converted into a 4 axle heavy haul tractor.

Over the decades, Jimmy McHugh also design several large heavy haul tractors and trailers that were build in the McHugh shops. One particular innovative McHugh large heavy haul project was moving a 610 ton Nuclear Reactor in Ohio for a power plant with a trailer that had 196 steer-able tires.

Jimmy McHugh’s interest in steam railroading and how he along with others, saved a bankrupt short line railroad from the scrappers torch, and turned it into a successful business. 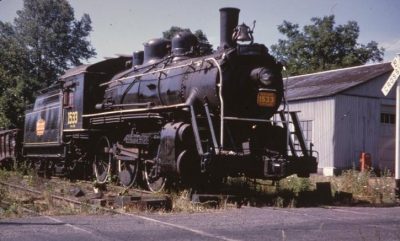 The re-railed #1533 with the lead truck removed for repairs at Buckingham Valley PA, July 1966.

Jimmy McHugh in 1966 began assisting a newly formed all steam locomotive powered freight and passenger heritage railroad located in south eastern Pennsylvania. Unfortunately within only a few days after start up of the New Hope & Ivyland railroad in early July 1966. The short lines 4-6-0 steam locomotive #1533 derailed at a switch traveling at an excessive speed. This caused severe damaged to the #1533 that twisted the frame, bent the driving rods, and the lead truck assembly also required major repairs. Jimmy McHugh was contracted to provide a crane and equipment so the #1533 could be repaired and Jimmy also became the NH&I’s official “Wreckmaster” in July 1966. 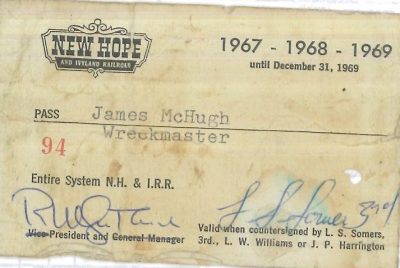 The original owners of the New Hope & Ivyland railroad quickly overspent the company’s funds on many outlandish ideas and it also had an absorbent payroll for employees, that caused the NH&I to declare bankruptcy in June 1970. The railroads well worn-out 4-6-0 steam locomotive #1533 would operate sporadically, so an old ALCO RS-1 diesel locomotive was acquired to supplement motive power when required. The first US Bankruptcy court appointed trustee R. Guthrie, who hired his wife as ticket agent, added his and his wife’s salaries to the NH&I’s payroll. Under the leadership of trustee Guthrie and his paid supertendent, the NH&I continued to fall into disrepair do to poor operating practices, that included a lack of maintenance to the right-a-way and equipment, with the railroad continuing to sink futhure into debt. 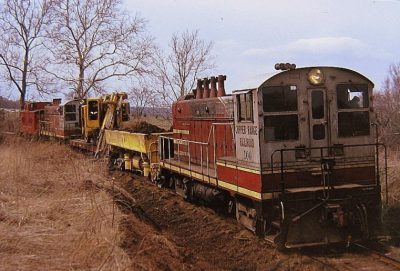 Jimmy McHugh is operating a McHugh truck mounted Gradall excavator to clear debris from the ditches along the NH&I right-a-way in February 1974. The work train consist of ex-Copper Range RR 100, a side dump car that was on loan from Jimmy’s friend Sam Freeman, flatcar with Gradall, ex-Copper Range RR 101, and a caboose.

By late 1972 the NH&I was close to becoming a thing of the past and being scrapped. A local railroad enthusiast Kenneth Andrews was appointed by the US Bankruptcy court as the NH&I’s second trustee an generously agreed to only be paid one dollar a year for his services. Kenneth Andrews knew that businessman  Jimmy McHugh was also a railroad and trolley enthusiast, so he asked Jimmy to volunteer and assist him with operating the NH&I. Kenneth Andrews and Jimmy McHugh, along with BCIDC, then developed a plan of re-orgazation to save the New Hope & Ivyland and it was accepted by the US Bankruptcy Court. In December 1973 the McHugh’s purchased their first diesel locomotives from the closed Copper Range Railroad located in Michigan, and the #100 & #101 Baldwin 1000hp switchers arrive at New Hope Pa in early January 1974. The McHugh family under the McHugh Bros. Heavy Hauling company in April 1974 officially became the designated operator of the NH&I railroad and Jimmy McHugh was named president of the line. The efforts of Kenneth Andrews, Jimmy McHugh, and BCIDC, during 1973 truly is what saved the NH&I from extinction and becoming only a faded memory. 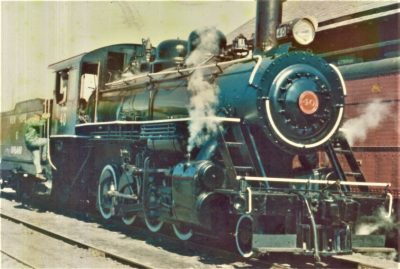 Jimmy McHugh president of the NH&I is the man wearing the green jacket climbing out of the cab of 2-8-0 steam locomotive #40 that just has just been restored back to service.

The determination of Jimmy McHugh to have a rebirth of the New Hope & Ivyland railroad included the restoration to a 1925 built Baldwin 2-8-0 steam locomotive and to have it back in operation to cerebrate the McHugh’s officially becoming the new operator of the NH&I. On October 18th of 1974 with much fanfare steam locomotive #40 was return back to service at the NH&I. The McHugh Bros. employees and NH&I volunteer’s, took on the task to restored a second steam locomotive during 1976. The US Army 0-6-0 required a major restoration that included replacing the worn-out wheels, and the #9 was returned back to service in August 1976. The NH&I railroad within 5 years under the sound leadership of Jimmy McHugh was released from bankruptcy in June of 1979. Due to the leadership of Jimmy McHugh, the McHugh Bros. employees, and the lines railfan volunteers, changed the doomed fate of the NH&I around allowing it to continue in operation. 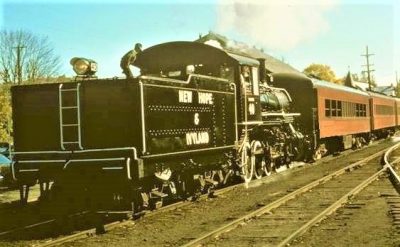 JC McHugh is the boy on the tender of newly restored steam locomotive #40 checking the water level for the engineer after the first run over the NH&I, October 18, 1974.

JC McHugh at the young age of 6 on the weekends would always be with his father Jimmy at work. By the mid 1970’s JC began working part time for the McHugh family business to learn the intricacies of the various McHugh operations and in 1979 he became a full time employee. JC’s skills and duties at that time included him to be a certified crane an union operating engineer, heavy haul truck driver, and steam / diesel locomotive engineer. Then in 1980 JC also became superintendent of the McHugh Bros. / NH&I  operation, and his duties included: leasing locomotives and locomotive cranes, along with providing on-site repair service of these units to short lines, industrial plants with rail operations, and railroad contractors. The McHugh Bros. / NH&I operation from 1974 expanded to include: 10 diesel electric locomotives, 500 new box cars, 8 flatcars, 4 gondola cars, a side dump car, 1 tank car, and over 200 pieces of MOW equipment.

During the year of 1982 Robert C. McHugh and Emmerson Clark passed away and Gerald J. McHugh became president of the McHugh Bros. companies. Unfortunately, Gerald J. Edward L., and Adelaide McHugh, did not have the same passion for the NH&I as did the late Emmerson Clark, the late Robert C. McHugh and the NH&I’s president James C. McHugh. In 1983 the Shore Fast Line was started with a partner company, and Jimmy McHugh was also president of that New Jersey railroad. The McHugh half interest of the SFL operation was sold in the spring of 1985, and JC McHugh and another McHugh family member were trustees of that corporation. 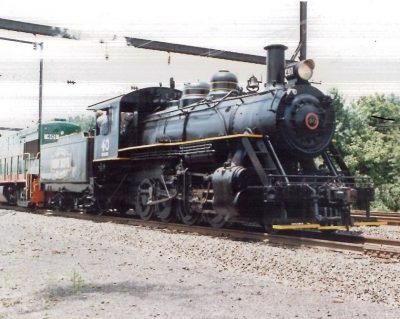 JC McHugh backs a special train into the siding at Penndel PA on the SEPTA / Conrail main line, June 1985. Jimmy & JC McHugh operated a special train to the US Steel mill located in Fairless Hills PA.

Jimmy and JC McHugh by late November 1985 believed that the new business plan put into effect by the other stockholders at the McHugh Bros. companies would not be successful, so they both resigned from the firm. Jimmy McHugh went to work for the United Crane & Shovel Company in New Jersey, and JC McHugh started the new McHugh Locomotive business.

One of several business operations of the old McHugh Bros. companies. This location is at business route 1 in Middletown Township PA.

A change of the management occurred at the McHugh Bros. companies in December 1985 that had Edward L. McHugh as president of the NH&I. It was not long thereafter that the railroad began to decline again, and in June of 1989 when the NH&I lease expired with BCIDC, the McHugh Bros. company did not have the funds available to purchase the railroad. BCIDC then leased the NH&I for a year to another operator until the railroad was sold to a new owner in 1990. The McHugh Bros. companies that included: Heavy Hauling, Crane Rentals, Equipment Corp., under the leadership of the remaining stockholders: Edward L., Gerald J., Adelaide McHugh, and William McNulty, ceased operation in 1987.