Historic Mack Truck Boxcab Locomotives number 3 and 4, were both scheduled to be scrapped by their former owner, until JC McHugh stepped in and saved one unit. 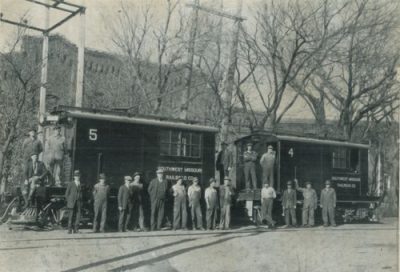 The Southwest Missouri Railroad Company in February 1924 ordered a mated pair of electric interurban type boxcabs from GE for the amount of $30,900.00 with a completion date of 01 March 1924 at Erie PA. The boxcabs arrived on the property as SMRC numbers 4 and 5, with a drawbar connecting the pair and a coupler at each end. The SMRC during 1927 built two identical boxcabs at their own shop located in Joplin, MO. The original 1924 GE built 4 was connected by a drawbar to one of the new 1927 built SMRC units and numbered 3. The original GE 1924 built 5 was connected to the other new 1927 built SMRC unit and numbered 6. 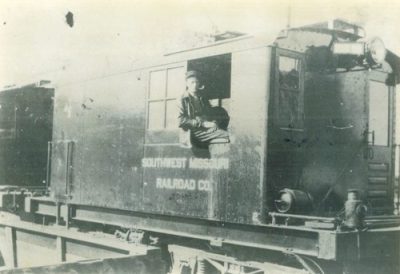 Then in 1929 the SMRC built two more identical boxcab’s that were connected by a drawbar and numbered 7 and 8. When the SMRC ceased operation sometime around 1939 the original 1924 GE built number 5 and SMRC 1927 built number 6, along with the 7 and 8, were scrapped. The original 1924 GE built number 4 and 1927 SMRC built 3, were sold to Mack Truck Inc and shipped to Allentown PA. This information was documented by a former SMRC employee that worked for the company until the SMRC ceased operation. The documented information in 1967 was forwarded to Dave Biles an employee at Mack Truck, and also a volunteer at the trolley museum that acquired one of the boxcab’s. 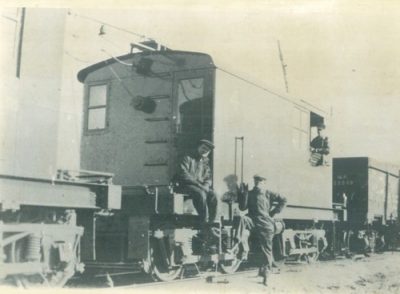 Mr. Biles over the years complied an extensive amount of documentation and photographs regarding the two former remaining SMRC boxcab locomotives that we have retained in our records. All of this material indicates that both boxcab’s retained their respective numbers 3 and 4. The NRHS Lehigh Valley chapter in 1959 published a book that covered all of the locomotives and railcars that were manufactured by Mack Truck, and it also identifies the two boxcab’s at the Allentown PA plant as number 3 and 4. Mack Truck Inc. between 1905 and 1939 built a total of 21 locomotives and sold 19 of them, except for the number 3 and 4. The boxcab’s were rebuilt as gas electrics and were the only 4 axle units produced by Mack Truck. 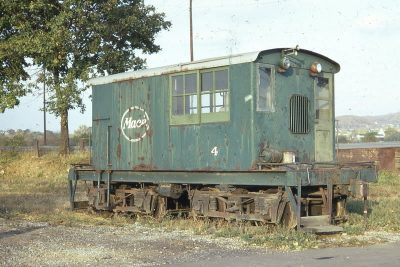 Some of the former Mack Truck employees that worked at the company during the early 1950’s to the 1980’s, have stated that the 1924 built GE number 4 was repainted and had a Mack logo applied for its entire stay at the Allentown PA plant. These folks have also stated that the SMRC 1927 built boxcab 3 retained that identification number and it was painted Mack green, but never had a Mack logo or number applied while at the Allentown PA plant. There has been some confusion in the railfan community that boxcab 3 was renumbered 5 while it was at Mack Truck. However, that can not be documented as fact. 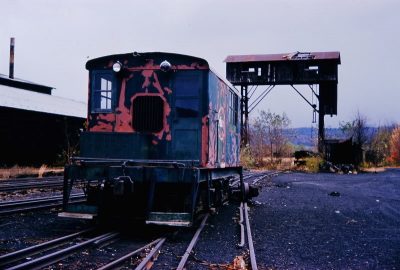 During 1939 the boxcab’s 3 & 4 were retrofitted at the Mack Truck factory with two six cylinder EP Mack gasoline in-line 6 cylinder engines. The engines were connected to a 1503 General Electric 300 volt generator that where wired in series to provide DC electric to power the 600 volt traction motors for travel. The two units were offered for sale as a new product of Mack Truck but were never sold do to issues with the electrical system. The 3 and 4 were then operated as plant switchers at the Allentown PA 5A and 5C plants to about 1959. After that time the two boxcab’s were occasionally operated to spot a random railcar and basically were parked on a siding. 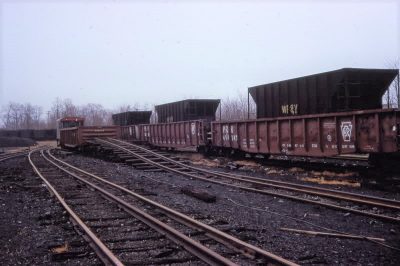 Mack 4 in 1967 was acquired by Railways to Yesterday a trolley museum located in Rockhill Furnace PA. The boxcab in November and December 1968 preformed the last switching duties at the historic dual 3 foot narrow and standard gauge rail yards in Mount Union PA at the East Broad Top Railroad & Coal Co. Mack 4 during March of 1970 was moved to an eastern PA short line the NH&I where it was briefly used until its departure in January 1971. Mack 4 was then stored in Penndel PA from 1971 until 1986, when the boxcab was transported by truck to Kempton PA where it rested on the ground for 22 years. 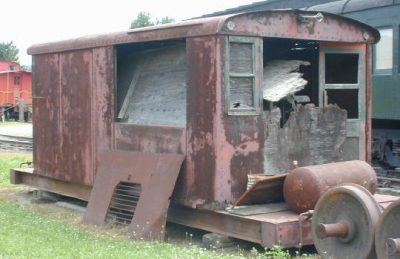 Mack 3 around 1978 was acquired by a fledging tourist line located in Kempton PA. The boxcab was renumbered as 35, because the new owners thought the weight of the locomotive was 35 ton. This boxcab was briefly operated here for a few years until one of the engines blew up due to low oil level. The boxcab was operated on occasion with only one engine until an electrical fire occurred. The group then attempted to make repairs to the boxcab, but aborted the project. Unfortunately, the Kempton PA tourist rail line stripped both of the two rare boxcab’s of many valuable components, that were required to be keep the locomotives in operation. 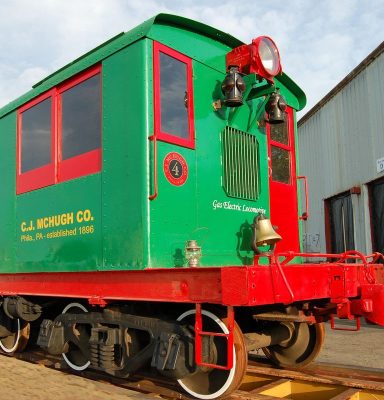 During early 2008 when scrap reached an extremely high price, the Kempton PA tourist line considered to have both rare boxcab’s see the flames of the scrappers torch. However, during March of 2008, JC McHugh purchased both boxcab’s to ensure that at least one of the rare Mack boxcab’s was saved. During late May of 2008, both #3 and #4 were transported to the McHugh Company so they could be salvaged to make one Mack locomotive.

The McHugh Company, restored one of the rare boxcab’s and painted it in a McHugh green and red paint scheme. The boxcab was lettered under the cab windows C. J. MC HUGH CO. / Phila. PA / Established 1896. On the side of the locomotive it was also lettered MACK TRUCKS, INC railcar division / gas electric locomotive. Both of the boxcab’s were also missing truck assemblies, so the saved Mack locomotive was placed onto a set of powered locomotive crane truck assemblies. 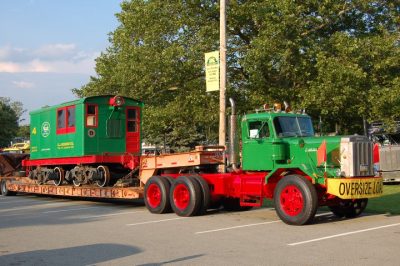 The restored McHugh 4 boxcab Mack locomotive was transported to a historic equipment / antique truck show at Brownsville PA ( south of Pittsburgh PA ) for a August 7, 8, 9, 2008 event. The enthusiast and general public that attended the show enjoyed seeing the McHugh 4 boxcab Mack locomotive displayed at the event. A few railfan’s complained that the locomotive was not painted into a Mack Truck heritage color scheme. However, it was more important to JC McHugh that one of the rare Mack Truck boxcab’s was saved and he was not concerned that some railfan’s may not like the color scheme applied to his locomotive. 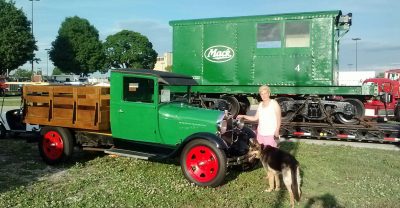 The boxcab retained the McHugh color scheme and was displayed at the 2009 and 2014 Macungie, PA historic equipment and antique truck show. In April 2015, a few friends and some retired employees of the Mack Truck company, inquired if we would consider repainting the locomotive into a Mack Truck inspired color scheme and display it at the National Historic Equipment and Antique Truck Show to be held at York PA in May 2015. So we painted the locomotive to represent the two boxcab’s service at the Mack plant. 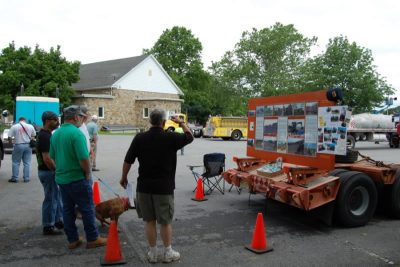 While displaying Mack locomotive 4 with our 1929 Ford AA stake truck at the York PA 2015 event, we met the president of the Giegertown Central Railroad and he express an interest to acquire the rare boxcab for the museum. The Mack 4 locomotive was displayed again in the same Mack Truck livery at the Historic Equipment and Antique Truck Show held in June 2016 at Macungie PA. The boxcab Mack 4 locomotive has been proudly on display at the entrance of the McHugh Company, except for the times that it has been at show events since 2008. When we had displayed Mack 4 at various historical equipment or antique truck shows, people were always interested to learn more about this rare locomotive. 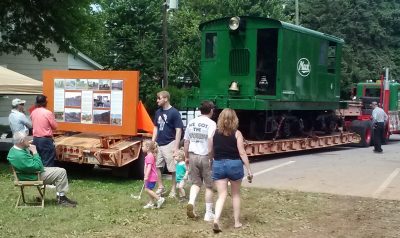 It was planned to display Mack 4 one final time as a memorial to James C. McHugh Sr. at the antique truck and historical equipment show that was to be held during June 19th & 20th of 2020 at Macungie PA. Jimmy McHugh, enjoyed discussing the history of the old Mack locomotive and antique trucks, with the folks who attended the annual event. This is truly and end of an era! Unfortunately the 2020 Macungie show has been canceled due to the Covid-19 crisis. After the restoration of the Mack truck locomotive in 2008, JC McHugh had been approached on several occasions to donate the rare boxcab to various railroad museums or sell it to private parties.

Geigertown Central Railroad & Museum during the year 2020 has become the new caretaker of the Mack 4 locomotive. 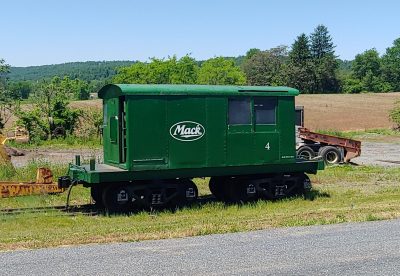 During late 2018 an offer was made by the Geigertown Central Railroad Museum to purchase the McHugh boxcab Mack 4 locomotive for the amount of one dollar with specific terms and condition of sale that were acceptable to the McHugh’s. The terms of the sale pertaining to the Mack 4 stipulates that the locomotive can not be: sold, leased, traded, or loaned to any: corporation, non-profit organization, or private party, nor can it be scrapped. This agreement also includes that if the GCRM no longer desires the Mack 4, that the locomotive will be sold back to the McHugh family for the amount of one dollar. Mack 4 is now part of the collection at the Geigertown Central Railroad & Museum. 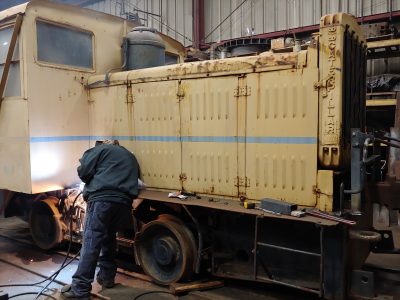 The Geigertown Central Railroad & Museum a 501-C3 non-profit corporation acquires and antique 1930’s built Plymouth locomotive for the amount of one dollar. The small mechanical drive locomotive was operated at the Harris Steel Company located in Camden NJ for many years. When the locomotive became obsolete, Tom Harris had it placed into storage for approximately 35 years because he desired to see the locomotive saved and not scrapped. Mr. Harris had given the locomotive to the Jimmy and JC McHugh with the agreement that they would find a good home for it at a museum. On 28 January 2019 the locomotive was placed into the McHugh facility so an inspection of the unit could be made and it was found to be in relatively fair used condition. 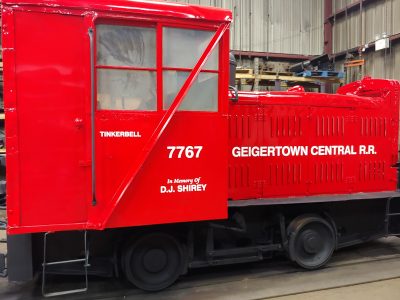 On the 4 February 2019, the gasoline pony motor was started and the CAT 13000 diesel engine was run and the locomotive successfully moved under its own power for the first time in well over 40 years. The unit then received some mechanical repairs and had adjustments made to it. The little Plymouth locomotive nicknamed “Tinkerbell” was painted in a bright red and flat black color scheme with “GEIGERTOWN CENTRAL RR” placed on each side of the engine hood. The Shirey family had a special request that the McHugh Company was very happy to help them with by placing “In Memory of D.J. Shirely” on each side of the cab and too also number the locomotive 7767 representing the late D.J.’s birth date. 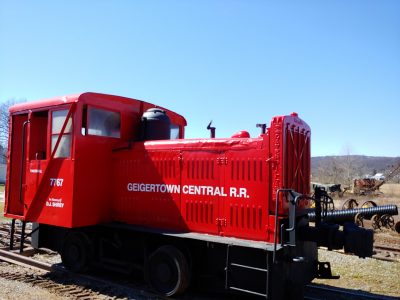 On 23 March 2019 “Tinkerbell” was transported by tractor trailer to Geigertown PA were a crowd had gathered to see the locomotive arrive at its new home. D.J.’s mother Janice, brother Paul, father Dave, and several friends, were also in attendance. As the tractor trailer pulled on site with the 7767, photographs and video’s, were taken to documented the days activities.

This small vintage locomotive today can now been seen on display at the museum. The folks at the Giegertown Central Railroad sometime in the future plan to operate 7767 coupled to a small 4 wheel railcar on special occasions to provide invited guest a train ride.