Western Maryland Scenic Railroad’s giant 2-6-6-2 locomotive No. 1309 on the photo freight at the famous Helmstetter’s Curve.

The McHugh Family, led by the late Jimmy McHugh, began supporting railroad preservation 60 years ago. From March 4-6, 2022 we celebrated the last 60 years and honored the memory of Jimmy McHugh when we hosted the McHugh Steam Special. The McHugh family was joined by employees, friends, business associates, and railroaders, from across the country riding behind the world’s largest operating 2-6-6-2 Mallet type Steam locomotive at the Western Maryland Scenic Railroad located in Cumberland, MD.

After Mr. Heinz became the Executive Director at the Western Maryland Scenic Railroad in June 2022, he reached out to J.C. to see if the McHugh Company could assist the non-profit corporation with the railroad’s diesel locomotive maintenance and provide repair services. Mr. Heinz invited J.C. and his wife Annie to visit the railroad on Labor Day Weekend 2021 to survey diesel locomotives No. 501 and No. 450 and enjoy the beautiful mountains of Western Maryland onboard the train ride to Frostburg.

On the afternoon of 10/10/21 the McHughs just happened to stop by the WMSR’s Ridgley, West Virginia Shop complex. As fate would have it, the WMSR’s two diesel locomotives had some mechanical and electrical issues develop on the Sunday train. Mr. Heinz asked JC if he could have a service team at the railroad on Monday 10/11/21 to correct the issues with the two diesel locomotives. A team of 6 McHugh service technicians arrived on site at 9:00am, they worked through the week and the work was completed by that Thursday afternoon. The WMSR had the Nos. 501 and 450 diesel locomotives back in service and they continued to operate until the regular season at the end of October. 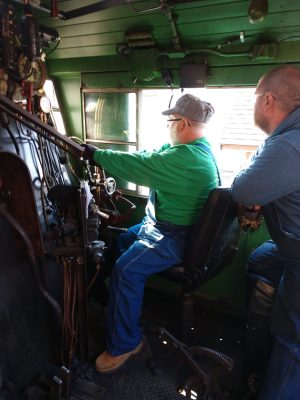 JC McHugh at the controls of the McHugh Steam Special.

A work scope to do some major repairs to the Nos. 501 and 450 locomotives was made and then scheduled for the second week of November. The cost of this project was going to be expensive and Mr. Heinz ask if the McHugh Company could assist with any discounts since WMSR is a 501-C3 non-profit corporation. J.C. talked to his wife Annie, and they agreed to provide two EMD traction motors for the No. 501 locomotive and a replacement axle wheel assembly for the No. 450, along with suppling some other mechanical and electrical parts to the WMSR, and to also provide a portion of the labor cost for the project at no charge, if a special steam train could be operated for the McHugh’s. This idea allowed Mr. Heinz to keep operating the railroad without having to divert the funds required for the No. 501 and No. 450 locomotives repair project. So, Mr. Heinz and his staff planned a weekend steam adventure event to thank the McHugh’s for their generosity. 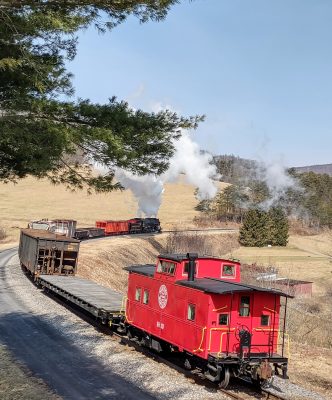 No. 1309 thunders along the Western Maryland Scenic Railroad’s mainline at the famous Helmstetter’s Curve.

During a discussion on January 17, Wesley Heinz mentioned to JC that the railroad was in the need of a tank car to help supply extra water for steam locomotive No. 1309. J.C. informed Mr. Heinz that he knew of a tank car that was possibly available. On the afternoon of January 20th, JC and his wife Annie, purchased tank car No. 8958 for the railroad and informed Mr. Heinz of their good will. Mr. Heinz asked what do we owe you for it? JC said nothing, Annie & I will donate it to the railroad if the WMSR placed a plaque on it “In loving memory of our grandson J.J. Miller” All that the WMSR had to do was to pay for the trucking of the tank car to Ridgley, WV. The McHughs’ even sent a crew to disassemble the tank car from the truck assemblies and then load it onto two tractor trailers at no charge.

The McHugh Steam Special was a three-day event. On Friday, March 30, 2022 locomotive No. 1309 arrived at the Cumberland station with a first-class passenger train that operated to Frostburg station. On Saturday morning at 8:45am the massive No. 1309 arrived at the Cumberland station pulling a vintage photo-freight train with JC McHugh at the throttle. At 9:00am, a dedication of the McHugh’s donated tank car with J.J. Millers father Andrew Miller christening No. 8959 with a bottle of campaign. Then the guests were off on a diesel power first class train that would take them along the railroad to various locations where they could watch, photograph, or video the giant locomotive No. 1309 as it thundered by. After lunch the trains departed Frostburg station and headed eastbound and down the mountain for one last special set of run-bys at Helmstetter’s Curve. The first run-by with steam locomotive No. 1309 was a special tribute to the late James C. McHugh, Sr. with his son J.C. McHugh at the throttle, and an engine crew member released Jimmy’s ashes into the fire box as a fitting tribute to a man who gave so much to the railroad industry and historic railway preservation. Backing down the curve after the first run-by, No. 1309 stopped to let JC McHugh climb down and be with his family trackside for one final run-by. 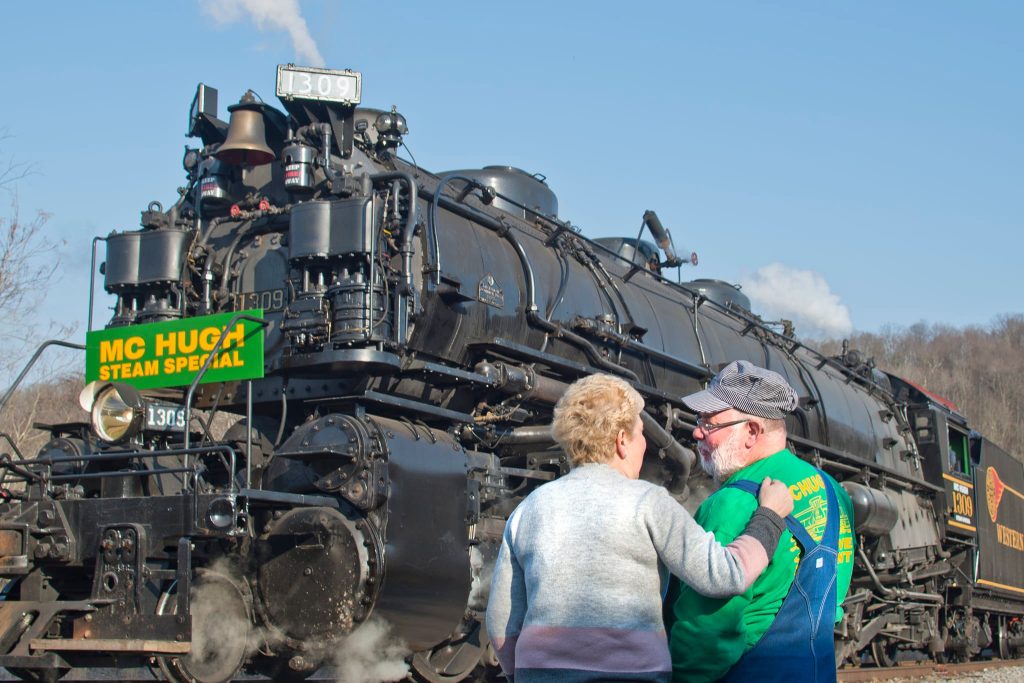 Annie and JC McHugh with the giant No. 1309 after the run-by honoring the late Jimmy McHugh.