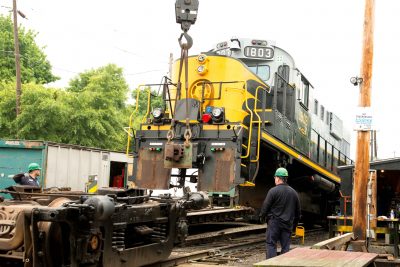 Removing the failed truck assembly from 1803.

The West Chester Railroad had a total failure to one of the obsolete style oil bath SKF bearings on an axle assembly of rare ALCO model RS18 #1803. This failure also ruined the axle requiring it to be replaced. To restore the locomotive back to service McHugh Locomotive & Equipment manufactured a new axle to AAR standards that would accept Timken 6-1/2” x 12” class F roller bearings. The new axle was machined to accept the GE traction motor support brass and the used bull gear from the old #1 axle set. The used qualified bull gear and the new Timken bearings were installed onto the replacement axle. The two old SKF axle journal box were modified to accept the new Timken roller bearings. The #1 and the #2 axles sets also had the wheels re-profiled. After the truck assembly received various other repairs at the McHugh shop it was reassembled. The old SKF covers where applied to the modified journal boxes with Timken bearings to have the truck assembly appear to be historically correct.

The 1803 with the rebuilt truck assembly installed.

This is a great example of how McHugh Locomotive & Equipment can provide safe, innovative, cost-effective solutions to all of your railroad equipment problems. Our highly-talented staff has the experience to engineer and manufacture custom replacements allowing older equipment to operate with off-the-shelf parts.

This composite photo shows the failed SKF bearing, the custom engineered adapter for Timken replacement bearing, and the old SKF cover plate in place providing a historic look for the rare ALCO RS-18.