In 1967 Jimmy McHugh donated equipment to move #172 & C-64 the first of many trolley cars that he would transport to the Rockhill Trolley Museum.

The Rockhill Trolley Museum was founded in 1960. The late Jimmy McHugh his family helped the Rockhill Trolley Museum tremendously in the late late 1960’s through the mid 1980’s with many different projects. Jimmy, a life member of the museum, first helped during the first moves of cars 172 and C-64 to the museum in November of 1967. All car moves and many other projects through the 1970’s and mid 1980’s were associated with the McHugh name. Those projects were vital to making the museum the operation it is today. 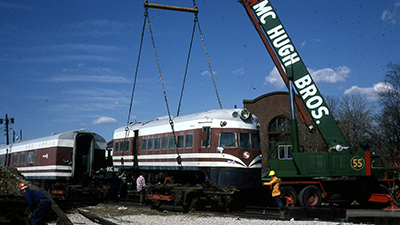 Jimmy McHugh was instrumental in saving and moving the four-car Liberty Liner.

The largest piece of equipment moved by the McHugh’s to the trolley museum was the Liberty Liner Independence Hall. In 1981 the museum was the successful bidder for the Independence Hall. The Liberty Liner was built in 1941 by the St. Louis Car Co. for the Chicago North Shore & Milwaukee Railroad and known a an Electroliner. When sold to Philadelphia it was naturally renamed Liberty Liner. The four-car, air-conditioned interurban train which is permanently coupled together is 156 feet long. Moving such a large piece of equipment was no problem for McHugh. Six tractor trailers and a large crane were needed to dismantle the train, move it from Philadelphia, and reassemble it at the museum.

In 1982 McHugh trucks are seen at the SEPTA facility at 69th Street in Philadelphia with two PCCs heading to Rockhill Trolley Museum.